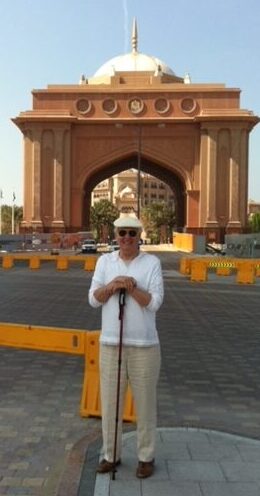 COLLEGE YEARS 1962 – 1964; 1966-1968
Roger attended Long Beach City College in 1962 and majored in theatre arts. He was active in college plays and auditioning for commercials and tv series. His greatest acting achievement came at age 18 when he was invited by David Emmes (founder of Emmy Award winner South Coast Repertory, a professional theatre operation) to be a part of an ensemble group of actors for the German play La Ronde. According to Emmes, this play was the impetus he needed to follow through and start SCE, known for featuring new playwrites.
Roger chose to put his acting career aside when he went on a Mormon mission to Cordoba, Argentina, from 1964 to 1966.
When he arrived home, he attended California State University Long Beach and graduated in 1968, with a Bachelors of Art in Speech and near minor in Drama.

Hendrix earned a Masters of Education, in Educational Psychology, from Brigham Young University, in 1970. He continued his graduate studies at the University of Southern California, and earned a Doctorate ( Ed.D.) in Higher Education and Educational Psychology, in 1976. Roger studied under renowned professor Earl V. Pullias, for which the Pullias Lectureship series was named. It is the longest continuous lecture series on higher education in America. Hendrix was the co-chairman of the committee which raised the necessary funds to start the lectureship series.

AUTHOR – ACADEMIC
Hendrix has written four books.
· The Rhetoric of Church and State: A Critical Analysis of Religious Law Jurisprudence. (Durham: Duke University Press, 1995). The other is Choosing the Dream: The future of Religion in American Public Life written with Roger Hendrix.
· Lund, Gerald N.; Hendrix, Roger A (1985). Leverage Point. Deseret Book Company. ISBN 0-87579-525-0.
· Gedicks, Frederick Mark; Hendrix, Roger (1991). Choosing the Dream: The Future of Religion in American Public Life. Westport, CT: Greenwood Press. ISBN 0-313-27809-1. Daniel O. Conkle of Maurer School of Law: Indiana University reviewed Choosing the Dream: The Future of Religion in American Public Life, in 1993. [5] · Hendrix, Roger; Brazell, Rob (1995). The Idea Economy. Salt Lake City, Utah: Harbinger Books. ISBN 1-56684-093-7.
· Hendrix, Roger (2005). How To Bend, Create, And Plan Your Future: A Compelling Guide To A Bigger Life. ISBN 0-9763641-0-7.
· His most cited and acclaimed academic paper is titled, “Religious Experience in the Age of Digital Reproduction,” authored in 2005, by Frederick Mark Gedicks and Roger Hendrix, published in the St. John’s Law Review. Frederick Mark Gedicks and Roger Hendrix also wrote the book, Choosing the Dream: The Future of Religion in American Public Life.
· Hendrix has authored more than 400 articles and writes weekly articles. He has won five radio broadcast awards for his daily commentaries on social, political, and economic trends. Hendrix is the Chief Financial Officer and President of Green Tea HP. Green Tea HP™ is a proprietary blend of extracted antioxidants from fresh green tea, noni juice, açaí, resveratrol and pomegranate. It contains what the Company considers to be the “right amount” of antioxidants to combat the environmental stresses we confront on a daily basis. Hendrix’s scholarly articles discuss global religious trends. Hendrix was called by Gorden B. Hinkley as a Trustee for the Deseret Trust Company for 18 years. He served as chair for several years. Hendrix’s philosophy on individual points of view, “It’s all opinion. Don’t put too much trust, if any, in people’s OPINIONS, no matter how powerful, smart, or drunk they may be.”

In 1992, Roger sold his consulting firm and with his family spent three years in Santiago Chile as a Mission President for the Church of Jesus Christ of Latter-day Saints.

Roger returned home in 1995 and in 1997 started Hendrix Consulting. Within the next years it secured national and international contracts.

The last ten years of his consulting were spent in ever growing amounts of time on the Arabian Peninsula in the United Arab Emirates and Saudi Arabia. Siemens of Germany was his main client. Hendrix also spent considerable time with his son ( Roger Jr.) in Dubai and Abu Dhabi distributing the product line for Grenx. Hendrix has had extensive service with the Church of Jesus Christ of Latter-day Saints. He has served as a bishop, stake presidency member and mission president. He formally was on the Board of Trustees of Deseret Trust Company, an affiliate of the Church of Jesus Christ of Latter-Day Saints. Hendrix received a national appointment to serve on the Strategic Planning Advisory Council to the Board of Governors of the American Red Cross in Washington, D.C. He served on this board from 1990 to 1992. In 2018, he participated in a ten-hour interview on the Mormon Stories Podcast, “Roger Hendrix-How a Mormon Mission President Lost His Testimony.” In 2021, he participated in an interview on the Mormon Stories Podcast, “Roger Hendrix-The Future of Mormonism.”

1983-1992
For nine years Roger became a management consultant for financial institutions, government agencies, and broadcast companies. He formed a management consulting firm named The Information Group. Much of the help needed to launch the firm was provided by Jack Adamson, president of KSL radio and tv.

In the late 1980’s Roger was asked to offer his consulting services to help the American Red Cross (Wa. D.C.) ensure HIV tainted blood stopped coming into the blood reserve. For that Roger received a national appointment to be a member of the Advisory Board for strategic planning to the American Red Cross Board of Governors.

He also was a radio commentator throughout the western United States on social, political and economic trends. His daily radio commentary entitled The “California Report won five awards for excellence in various categories.

The 1987 John Anson Ford Award for creating better understanding among minorities to Dr. Roger Hendrix for his California Report commentaries on KBIG-FM radio. Issued by the Commission on Human Relations of Los Angeles County Government. Award issued in 1988 at the Dorthy Chandler Pavilion.

The 1989 International Angel Award, “ honor[ing] those creators of motion pictures, television, books, albums and all forms of media whose works had outstanding moral, spiritual and social impact.” Award given to Dr. Roger Hendrix for his KBIG-FM’s California Report. Award presented by International president Mary Dorr and novelist and screenwriter Gordon Gordon in Hollywood California.

The 1990 Angel Award for excellence in media. Hollywood, California.

The 1991 Angel Award for excellence in media . Hollywood, California.

Two additional awards outside of radio commentaries were:

In 1968 Roger and Cheri, his wife of one year, accepted their first teaching assignment with the Seminaries and Institutes of Religion in the Church Education System of the Church of Jesus Christ of Later Day Saints ( Mormon) adjacent to Cyprus High School in Magna Utah.

After two years he accepted assignments as an instructor and director at three institutes of religion adjacent to El Camino College, Los Angeles Harbor College, and the University of Southern California.

During the time (1970 – 1980), it was a dynamic time during which religion was severely challenged on college and university campuses, yet enrollments in religion classes grew significantly at those three institutes.

From 1980 to 1983, Hendrix was involved in administration as an Associate Area Director and Teacher Support Consultant for all seminaries and institutes in Southern California. Roger worked under and with Dr. Gordon E. Mauss, Area Director.